Note: This is the final travel memoir in the series. This story and the 20 stories preceding it will be made into an e-book. More information will follow.

Flying from Egypt to Israel is not easy. For starters there aren’t any flights. It’s even more difficult doing it the other way. The Egyptians supposedly hassle you if you have Israeli stamps in your passport. To get from Cairo to Tel Aviv, I spent a night in Amman, Jordan. I was going to stay longer in Jordan and visit Petra, one of the great sights of the world, but when I found that it took all day and well into the evening to make the trip down and back, I shortened that part of the trip. The whole thing sounded like a pain in the butt to me. One needs to do these things when one is younger and in good health. 20 years ago, I would’ve taken cheap local transit down there, stayed overnight in a budget hotel and walked my ass off all day checking out Petra.

Even though I didn’t stay long in Jordan, I was impressed. Considering the turbulent neighborhood he lives in, the King seems to be managing well. I enjoyed my one night in Amman and flew into Tel Aviv the next morning. 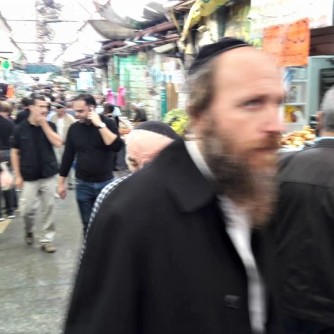 Immediately upon arrival in Tel Aviv, I booked a car and driver straight to Jerusalem. The journey was a pleasant hour-long, uphill ride. From the well paved highway, one can see a number of towns perched on the hills on either side of the freeway. Israel gives the feel and appearance of a developed country. After having lived in developing countries for a number of years, one can sense the difference. It certainly appears cleaner and better organized than Egypt where I had just been, for example. 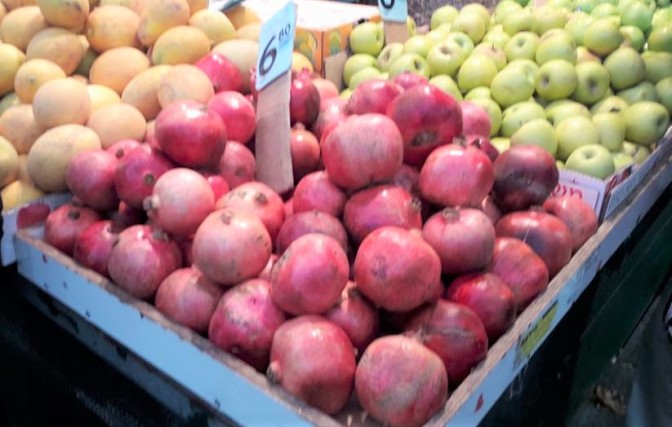 My Jewish friend in Bangkok who is a correspondent for the Jerusalem Post, recommended that I stay at the King David Hotel. Upon investigation I discovered that this hotel is where the heads of state stay when they visit and would cost me 600 a night. While at this stage of my life my money is probably going to outlast me, I couldn’t bring myself to pay that and I stayed across the street at the Eldan Hotel at number 24 King David St. for a quarter of the price. Only a 15 minute walk to the Jaffa gate, It was a perfect location for seeing the old city of Jerusalem.

I made several visits to the Old City. The three monotheistic religions have several extremely important sites here. What is interesting is that they are all within a couple hundred meters of each other. This also has been a great point of contention over the years. Who should control this land? The recent announcement that the United States would move its embassy to Jerusalem has tended to bolster Israel’s case and has provoked a large number of protests. 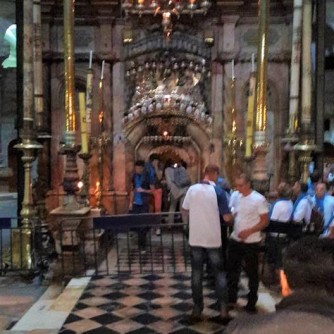 The Church of the Holy Sepulchre in the Old City of Jerusalem is the most sacred site in Christianity. This is thought to be Calvary where Jesus was crucified, buried and resurrected. You can see and touch the Stone of Anointing where Jesus is said to have been anointed before burial. Several Christian sects share in the maintenance of the holy site. Apparently they oil the anointing stone daily. It was oily to my touch. My Catholic fiancée said I should have rubbed some of it on my ailing arms. Damn, I missed a possible cure. 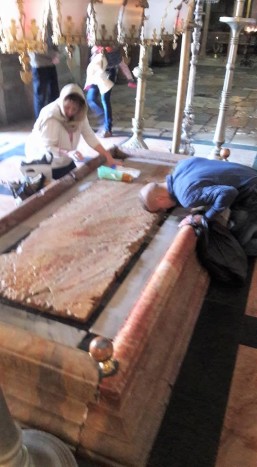 The alleys leading up to The Church of the Holy Sepulcher have special significance as well. For my Catholic friends, this is the original place of the Stations of the Cross. This route includes the 14 stations through which Jesus passed carrying the wooden cross on which he was later crucified by the Romans.

If one continues 100 meters or so past the church, which is the holiest site in Christianity, one comes to the holiest site in all of Judaism. The Temple Mount and the Western Wall.  It was from here the world expanded into its present form and God gathered the dust used to create the first man, Adam. This is where Abraham brought his son to sacrifice and God stopped him.

If you go to the right hand side of the Western Wall, there is a ramp available that will take you on top of the hill. Stairs are also available. If the Israeli security services allow you to pass, this leads to the the Al-Aksa Mosque, which for Sunni Muslims is the third holiest site in Islam. They believe that Muhammad made a miraculous night journey from Mecca to Jerusalem in 621a.d. At this “farthest” mosque he was lifted to heaven and returned to Earth to carry on his teaching. 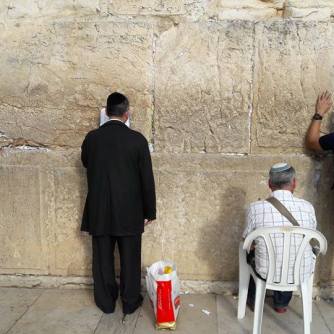 Alleged problems regarding access to this Mosque was a source of violent unrest while I was there. For security reasons, the area was closed that day and I could only get a distant photo. I had much better access to the Jewish and Christian sites. 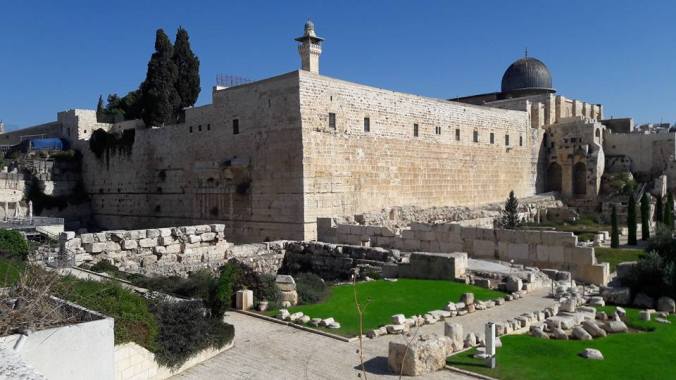 Seeing these three sites are a “must do” when visiting Jerusalem. Several other sites are  worth visiting as well. I Liked the Israel Museum and the Tower of David. The Yad Vashem Holocaust Museum is a must see. I enjoyed shopping in the Machane Yehuda Market.

I had a rather shocking personal experience upon returning to my hotel after a long day of visiting those sites. After having a light dinner at the YMCA Three Arches Hotel next door, I retired to my room to take a nice warm bath and call it a night. As I got in the bathtub, I notice the tub was rather narrow and quite deep. Definitely not made for Americans. When I finished my bath and began draining the water, I reached up to the high sides of the tub to pull myself out. To my shock, the disease had progressed to the point where I didn’t have the strength to lift myself out. I had visions of being stuck all night in the bathtub and having to wait for the maid to get me out in the morning. Finally after writhing every way I could, I was able to get myself on my stomach and pull my knees up and stand. 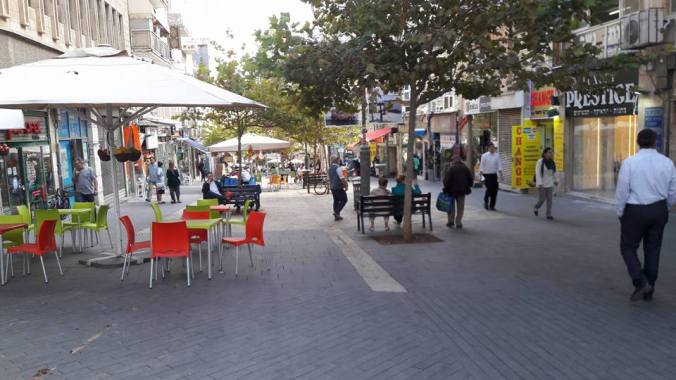 Since I have a gallows sense of humor, I recall at one point during my struggle in the tub, I started laughing. The truth was, however, that my solo travel days were coming to an end. In fact I would’ve loved to have my fiancée traveling with me on this trip, but my ultimate destination was the US and their tourist visa restrictions were insurmountable. When I got back to the States, I began running the visa gauntlet and am happy to say we are now married and living in the US.

Aside from the bathtub incident, my time in Jerusalem was very enjoyable. Everyone should see this area to better understand what’s presented every day on the news. From Jerusalem I took a car back down the hill to Tel Aviv. My driver was an Israeli Arab. He was a nice guy said he was happy living in Israel. 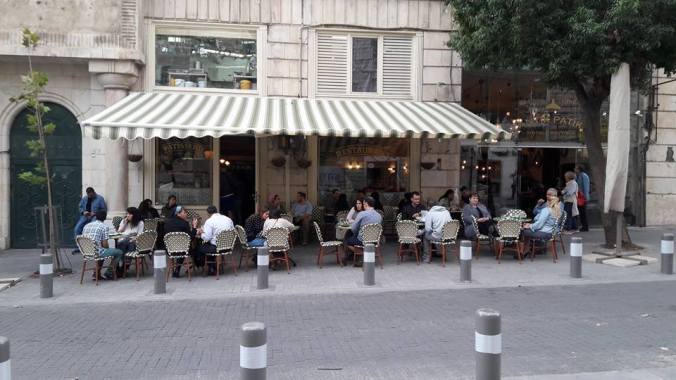 I spent two nights at the beach in Tel Aviv. I stayed at the Brown Beach House which is one block from the beach. My Jewish friend in Bangkok had warned me that Tel Aviv is just another city with not that much to see. Taking his advice, I just relaxed for two days on the beach. From there I flew to Cyprus, spent a few more days at the beach there and then it was back to the States by way of Vienna, Austria.